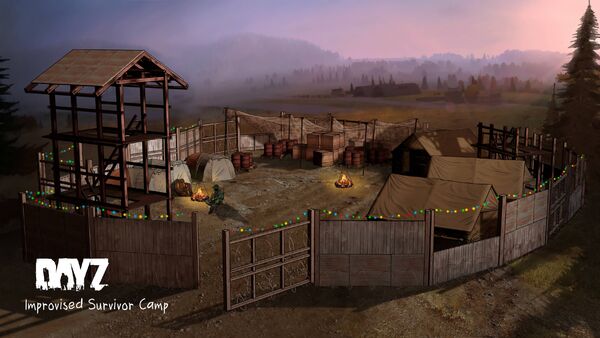 Base Building is a core game mechanic of DayZ Standalone.

As of 1.0, players can construct bases or camps, ranging from simple loot stashes in underground stashes or barrels, to complex walled structures with Fences, Watchtowers, an electricity system and vehicles.

Objects such as tents or electricity system items can be placed using a ghost 'precision placement' model. This allows you to accurately place items in a specific location and rotation.

In addition to building a camp from scratch, players also have rudimentary barricading in the form of lockpicks. Just about any functioning door on any existing structure in Chernarus can be locked for the purpose of impeding another person's ability to enter that building. This is only temporary however since melee weapons can be used to break through the locked door. Given its current limitations, most people choose to use this ability as a distraction for creating a surprise attack or to alert them when another player may be trying to enter the building that they are currently occupying.

Player camps can be constructed out of a small variety of building pieces currently in the game. These consist of tents, barrels, and base building pieces. You can find tents and barrels spawning naturally in the world, whereas you are required to hand-make pieces like walls and towers. Keep in mind that the construction of towers and fences can only be completed with planks, nails, wooden logs, and sheet metal, though the kits themselves have to be made out rope and short sticks. Flag poles can also be constructed in or around player-created bases and can be used to fly a variety of flags found in game. Flags lower over time, but can be re-raised via player interaction. Any item within the effective radius of the flag will have a small symbol next to its name that will indicate whether it is being prevented from despawning by the presence of the flag.

Some of the items that can be used involve the following: