This page covers the Standalone version of DayZ. For information on the Mod see Mod:Chernarus

The Republic of Chernarus, or simply Chernarus, is a fictional former-Soviet Republic country in DayZ Standalone, based on the popular Chernarus (Terrain) from another Bohemia title: ARMA II.

Chernarus was established as a typical republic-style nation after it gained independence, with its formation following the dissolution of the Soviet Union in 1991. Chernarus's landscape consists of mostly rural areas, with few larger cities. The capital of Chernarus is Novigrad, located in the south-western region of the country. The game is currently set in the most northeastern province called South Zagoria. At present, South Zagoria is infested with mindless Infected, as well as Survivors who have to endure a lack of available food and constant threats of the infected and other Survivors. Chernarus also shares its similar sounding name to the real-life country of Belarus, a possible influence on the developer's part, as Belarus was a post-soviet state bordered next to Russia.

The first settlements in the area date back to the 5th Century B.C. when the valleys of the Burnaja and Svetlaya rivers were inhabited by Skyth tribes and nomads, who later formed the Takmyr and Karzeg nations. The center of modern Chernarus had been founded in the delta of the Burnaya River and on the coast, divided from the Zagorie region which was under the supremacy of a Moscow Principate by the Black Mountains ridge.[2]

The local Slavic population constantly had to fight off the raiders from the southwest so it was traditionally bound with Russia, but always kept its independence. In the 12th Century, it was controlled by dukes; in the 13th century, it was united by Taras Kozub. The Kozub dynasty ruled until 1631, when Chernarus joined the Russian Empire. Chernarus became the Soviet Socialist Republic in 1922 after the end of the Russian revolution of 1917. After the demise of the Soviet Union in 1991, Chernarus gained its independence.[3]

Following this, Chernarus was established as a Republic and its army -- the Chernarussian Defence Forces -- took possession of former Soviet military installations and stockpiles. In 2009, it suffered from a civil war that left the country in turmoil, forcing it to seek help from Allied Nations and U.S forces.[4]

The civil war was primarily caused by the Chernarussian Movement of the Red Star (ChDKZ), a communist-socialist faction that had their presence in the northeastern Oblast called South Zagoria. The communist-socialist faction was also known as the "Chedaki", an abbreviation of the full name. They committed several war crimes and attempted to cover them up, with their goal being to create a socialist state within Chernarus just like during the Soviet period of Chernarus's history. Feelings of nostalgia for the Soviet Union and its superpower status under socialism led to their creation and agenda and small gained support among older generations who lived most of their life in the Soviet Union. It was not until a staged bombing in Red Square in Moscow, Russia, that led to the Chedaki's annexation of various regions of Chernarus. After the movement spread across almost all of South Zagoria and several other contested territory of Chernarus, they took the island of Utes and kicked out the CDF forces stationed there, which was only later to be liberated by the United States Marine Corps.

The Russian Federation became involved after the ChDKZ staged the bombing in Russia, killing dozens. The Russian government was fooled into thinking it was the nationalist guerrilla faction known as the National Party (NAPA) that conducted the bombing which had links to the Chernarussian government, thus leading to the presence of Russian troops in the very north of South Zagoria. They gave excessive amounts of weapons to the ChDKZ which was already against the Chernarussian government, in turn causing the civil war of 2009 where the whole region of South Zagoria collapsed into chaos and death. The AN and the US were sent into the southern parts of the oblast, securing coastal cities from the ChDKZ like Chernogorsk to liberate cities and secure any further conflict between the nations. It was only to be revealed in one of the endings of the ArmA II campaign, that a rogue government official in the Russian government sent money and support to the ChDKZ to deface and frame NAPA as the sole perpetrator of the terrorist attack in Russia, and sought to bring war between Russia and Chernarus.

Not much is known about the Infected outbreak in Chernarus, but sometime after the civil war of 2009, the inhabitants of the country became infected, likely with a disease or a similar biological affliction. It can be assumed the infection began sometime between late 2012 and late 2013 however, or was at least occurring during that time due to the presence of the FNX-45 in the loot tables in-game.

In many places around Chernarus, garbage bags marked as "toxic waste" can be found, indicating some clean-up attempt was potentially made during the beginning of the outbreak.

At the same time, military troops of the Chernarussian Defence Forces, the Armed Forces of the Russian Federation, and the Allied Nations were clearly in Chernarus. If the reason for this was the outbreak or the prior/coincidental civil war, it is not known. Regardless, the combined forces could not stop the hordes of infected and were slowly overrun even with heavy weapons like tanks, which were destroyed or abandoned. The military tried to contain the outbreak and organized the systematic disposal of corpses (as can be seen at Kamensk Military Base).

After the outbreak, the local military and civilian defenses were overwhelmed and disintegrated. All inhabitants either fled the country, were turned into Infected, or roam the desolated area as Survivors. The lawlessness led to a rise in banditry and an overall lack of equipment and available food. 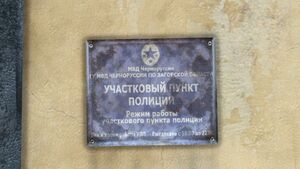 Sign on a local police station referring to the Zagoria Oblast in the top right corner. Russian: (Загорской Области)

Chernarus is located somewhere in the Caucasus Mountains, with the Green Sea on its eastern and southern borders. It consists of rough terrain and even a few islands. It has a rugged yet verdant environment of rolling hills, covered by dense forests and deep valleys, hidden in forested ridges or on elevated plateaus with lush meadows. Its valleys conceal quaint rural villages connected by barely perceptible dirt tracks, while its coastlines support sprawling industrial cities with wide highways and rail networks.

This area has the typical climate of an Eastern European country. It has fairly diverse vegetation with multiple useful plants, and its wildlife consists of former domesticated species and different wild animals. For a detailed description of the different landmarks see the Landscape article.

Chernarus previously produced multiple natural resources such as wood and different mined materials, which can be seen among the various factories -- especially the lumber mill in Berezino or the quarry in Solnechny.

The country has a developed network of roads and streets, but only a few are asphalt or even two-lane streets. Most rivers are regulated by different dams.

South Zagoria has only one power plant, located in the post soviet industrial city Elektrozavodsk. Multiple power lines stretch out from it all over the oblast. The country also had its own fire and police services.

There are five major coastal towns:

Major towns off the coast include:

There are also many smaller towns, villages, hamlets, etc. Scattered around Chernarus, you can also find a plethora of man-made landmarks, including multiple historic castles that can be visited.

Before the outbreak, Chernarus had a strong presence of police and military. There were multiple bases in Chernarus, but with the Infected outbreak, even more temporary camps were established.

For a full list of such places, see these articles:

Chernarus is officially a bilingual state, where the Russian and Chernarussian languages have official status. The prevalence of the Russian language receiving official status stems from the long standing historical and cultural ties to neighboring Russia. In the North Eastern province of South Zagoria, along the border with Russia, the dominant usage of the Russian language is due to the ethnic Russian minority being the majority in the region. The heavy usage of Russian in the north-east has historically caused skirmishes between Chernarussian nationalists and the Russian populace. As a result of this conflict, various separatist movements have sprung up, most notably the Chernarussian Movement of the Red Star, which had aims to create an independent South Zagoria, or even full integration with the Russian Federation. Chernarus also holds a similar status to the real world post-soviet country of Belarus, where the Russian and Belarussian languages hold official status in the country. It is very likely and almost certain that the developers modeled Chernarus off of Belarus, both in terms of the name, geographic proximity to Russia, and political status.

The Chernarussian Language is a fictional West Slavic language that is exactly identical to the Czech language and was simply renamed as "Chernarussian." Chernarus is heavily based off the Czech Republic, which is the home country of the development team. Chernarussian is written in the Latin script, making it easy to distinguish it from the cyrillic script used in the Russian language. Throughout Chernarus, many signs written in both Russian and Chernarussian can be found in Hospitals, Medical Centers, billboard advertisements, vending machines, store fronts and so on. The Chernarussian language is less frequent compared to its Russian counterpart, making it easy for most to assume Chernarus takes place in Russia. In the School buildings found around the map, the primary language used in schools is Chernarussian, as evident on posters and information boards found within classrooms and hallways. There are also posters which indicate that there were Russian language classes within the school system.

The most prominent religion in Chernarus is the Russian branch of the Eastern Orthodox Church, as identified by the multiple churches featuring traditional architectural elements seen in Russian churches. Gilded cupolas adorned with orthodox crosses, ornate iconostasis' in front of alters, and mosaics in the vaults or domes of the churches.

Chernarus is marked by its well-preserved cities and towns featuring primarily traditional styled architecture, a unique feature in its identity. Neo-classical and baroque architectural styles can be found in many cities, with row houses being a prime example. Stalinist architecture is also another form of architecture that can be seen in Chernarus, however uncommonly. The only example of Stalinist architecture is the municipal City Hall building in Novodmitrovsk, one of the tallest buildings in the game. Modernist architecture is prominent in many cities. During the Soviet era, many apartment blocks, schools, and stores were built in Brutalist and Socialist Realist architecture styles. Brutalism finds its origins from Western Europe, and was widely used in the USSR during the early 1960s after the severe housing crisis from World War 2.

Topographic tourist maps of South Zagoria can be found in-game, they provide Survivors with proper navigation of the local province via roads or tourist trails. Hiking Trails are also accompanied by resting areas with another topographic map of South Zagoria, which has a legend. There is also satellite imagery found in the game files, which give an insight as to how the region looks from space.

A rendered image of the real-life topographic Chernarus Tourist Map, the second edition to be produced thus far (2019). Map scale ratio is 1:25000 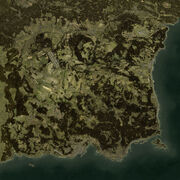 Outside of South Zagoria[edit | edit source]

Beyond South Zagoria are multiple cities, islands, rivers, and lakes. There is currently no other information regarding these locations apart from the map and road signs found in-game. 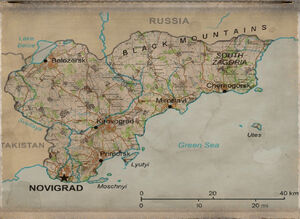 Map of the entire country, the capital can be seen at the bottom left

Other Places in Chernarus[edit | edit source]

A sign at Bay Tikhaya acknowledging other cities beyond the map's confines.