Chernarus+ is the region in which the game DayZ is set. It is a post-Soviet state in the midst of a zombie infection.

The landscape is filled with large mountains and rolling plains. There are many large and small settlements around the state. Many new buildings and settlements have been added, and almost every structure is enterable. 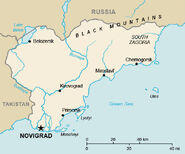 A map of Chernarus and the surrounding states.
Add a photo to this gallery

Retrieved from "https://dayz.fandom.com/wiki/Chernarus%2B?oldid=4913"
Community content is available under CC-BY-SA unless otherwise noted.