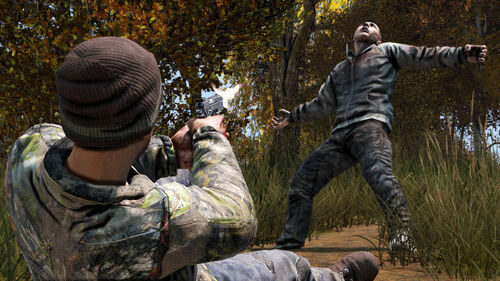 What is DayZ Standalone?[]

What has become known as simply DayZ, this game is the continuation of creator Dean Hall's vision for his popular Arma 2 add-on now referred to as the DayZ Mod. Taken from the game's official description on the Steam Store:

What is the difference between the DayZ Mod and DayZ Standalone?[]

DayZ Standalone, as its name implies, is a wholly separate game built on its own foundations that are no longer reliant on the ArmA II bones which made the DayZ Mod possible. It is being developed alongside the creation of a new in-house game engine at Bohemia referred to as Enfusion. It also includes an extensively reworked Chernarus map.

Is it worth buying DayZ?[]

DayZ is an incredible experience, however, if you require a fully polished title and are not prepared to deal with the consequences of playing a game that is still undergoing heavy and complicated changes, then DayZ may not be right for you. Development of the game is still ongoing despite an official release labeled 1.0. Bugs and issues are still common, and many previously planned or introduced features are still due to be implemented in the Enfusion engine. Despite this, the game is one-of-a-kind, and you will struggle to find a gaming experience that does large-scale multiplayer zombie survival like DayZ.

How will I get this game and on what platform(s)?[]

DayZ Standalone is intended to be a multi-platform title. Currently, the game is available for Windows PC (via digital distribution on Steam), the Xbox One Marketplace, and the PlayStation Store.

What are the system requirements for DayZ Standalone?[]

The necessary hardware and software for the Windows PC version of DayZ are listed below, as found on the Steam Store page.

For a list of development-related resources including the sites referenced below, please see our Current Events page.

When is the next update and what will be in it?[]

Updates to the Stable branch occur when a major revision to the game has met the quality and playability standards necessary for mass consumption. Prior to release on that branch, updates will first be tested for a length of time on the Experimental branch to prevent any critical issues from affecting gameplay for the majority of users. There are not fixed intervals for the release of updates on either branch; instead, as soon as an update is ready it is made available to the public. For more information about what is contained in past updates, visit the Changelog page.

Updates to the Experimental branch are more frequent, and typically consist of small changes from build-to-build. These updates occur usually several times a week, and are usually focused on fixing specific issues with each release rather than introducing new content. For more information about the two branches, see the Experimental page.

First, search the official forums and the DayZ Subreddit. Many issues are already known, and some have temporary or known fixes provided by the developer or other users. Also check the Feedback Tracker -- if your particular issue has not already been submitted, please add it there. Simply verifying the integrity of your cache in Steam will fix some issues, but for additional help you will want to seek out one of the aforementioned outlets.

Report it on the official Feedback Tracker. Make sure to read the how-to guide first. You can also post your issue on the official DayZ forums. In either case, be detailed and give as much information as possible and, if you are able, provide screenshots and/or video.

What is the difference between 1st Person and 1st/3rd Person servers?[]

1st Person, as its name implies, is restricted to the use of the first person perspective only. Servers labeled 1st/3rd Person have enabled the ability to use either the first person or third person camera perspectives. There is no third person only option for server configurations. For more information about their differences, visit the Servers page.

How do I change my in-game name?[]

Your default name will be the name you use for your computer (i.e. "Christopher"). On the main menu screen, hover your mouse over the name box in the customize menu found through the title menu; this will enable you to type in that box and set the name to whatever you wish.

What's the difference between Stable and Experimental?[]

For information about this topic, please see: Experimental.