This article contains outdated information. Some or all of the information present may not be reliable until this page is updated - please help improve this article if you can. The Discussion page may contain suggestions.

This article contains outdated information. Some or all of the information present may not be reliable until this page is updated.
Please help improve this article if you can. The Discussion page may contain suggestions.

You can help DayZ Wiki by uploading an improved version of the image(s) found on this page. - if the problems have been addressed, please edit this page and remove this notice - it will start with {{Reupload and end with }}.

You can help DayZ Wiki by uploading an improved version of this image.
If the problems have been addressed, please edit this page and remove this notice. It will start with {{Reupload and end with }}. 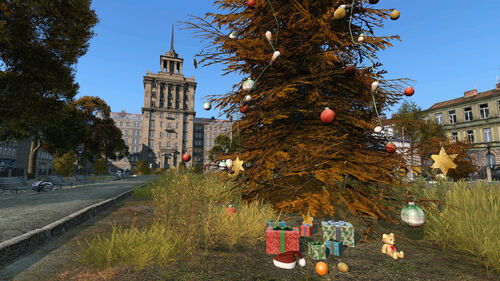 Holidays are seasonally-timed updates for DayZ Standalone which offer some change to the game or additional content as an act of good will towards the community. Rare items, special functionality, and map decorations are just some of the possible content used to set the tone.

The in-game celebration of holidays has been a part of DayZ since its very first year in Early Access, and they have been included every year since in some form or another. While this has traditionally been limited to minor inclusions around the time of Christmas, beginning in 2017 the developers saw fit to let survivors have fun with Halloween as well. It is possible that additional holidays could be included throughout the calendar year in the future, and making that a reality will become more practical following the game's move to Beta and full release in 2018.

Seasonal events are not only a regular treat for the community, they have in some cases even served the functional purpose of testing something during DayZ's period of Early Access. The specifics vary from year to year, but it goes to show that no part of the game is off limits when it comes to experimentation during development.

Please keep in mind that this article is only a reference for holidays which have been officially recognized with some kind of in-game content. It does not include anything meta, or holidays which players celebrate unofficially through their own means.

This was the first year for Halloween to be a part of DayZ. Although the content was minor, it was an important demonstration of the potential for more holidays to be included throughout the year.

Pumpkins were temporarily transformed into Jack-o-Lanterns which gave off light but otherwise functioned the same as pumpkins. Their light output is shaped like the eyes and mouth carved on the front.

This year's Christmas event marked the very first holiday to be celebrated in DayZ. Although the game had been released prior to Christmas in 2013, it was not included in-game until the following year. The tone for the next several holidays would be set by this event.

Christmas trees could be found in the common areas of major towns and cities. They came encircled with a number of Teddy Bears which contained random loot: ammunition, attachments, food, paper, etc. (anything 1 slot in size). This was the debut for the Teddy Bear as well as the concept of containers spawning with random loot inside, albeit on a small and harmless scale.

For the second year of the holiday being recognized, Christmas Trees unfortunately did not come with accompanying Teddy Bears as they had the year prior. The trees themselves were the extent of the celebration, and were found in slightly different locations than 2014 due to map changes.

The trees had a 40 slot inventory which seems to have been intended as the means to distribute "gifts" this time around; however, in reality the trees did not spawn any loot. Instead, survivors took to leaving gifts for each other within the inventory of the Christmas Trees. These items would despawn after some time, but on highly-trafficked servers this seemed worth the risk.

Much the same as the year before it, 2016's celebration of Christmas was limited to the trees placed throughout the map. Once again, the specific locations where trees could be found had changed due to map updates, and this year the total number of tree locations increased (from 10 to 13).

There were no Teddy Bears and no inventory for the Christmas Trees. On this year, they also stuck around for quite a long time (well into February).

Perhaps the most extensive holiday content addition to DayZ so far, 2017's celebration of Christmas brought new items into the game that went well beyond Christmas Trees. This year introduced clothing in the form of Santa's Hat and Santa's Beard in addition to three different sizes of Gift Box.

These gift boxes contained random loot in the same spirit as the Teddy Bears in 2014, but varied in size (from 1 slot to 12 slots) and loot content: ammunition, magazines, attachments, food, supplies, and the seasonal clothing items were all possible. Boxes could potentially be found at any civilian loot location, primarily houses and wrecked cars, but did not spawn in proximity to Christmas Trees as the Teddy Bears once had in years past.

Christmas Trees can be found in the exact same 13 locations as the previous year.