From DayZ Wiki
Jump to: navigation, search
This article is a stub. You can help DayZ Wiki by expanding it.

Livonia is a downloadable map in DayZ Standalone. It was introduced on the 3rd of December 2019 alongside the 1.06 update as the DayZ Livonia DLC based upon the ArmA III map of the same name. Livonia, located in Poland-Lithuania, is a woodland region by the name of Nadbór that was a satellite state of the Soviet Union until Poland gained independence in 1989. Nadbór is one of three administrative districts and is part of the Andrzejów Division, hence the capital of Livonia. In Livonia, the cities are few and far between, dispersed amongst thick forests. Similar to Chernarus, the majority of cities are based on real locations, but unfortunately, players cannot travel to Andrzejów. At present, Livonia is crawling with Infected, alongside Survivors searching for their next meal. Food in Livonia is scarce, and combined with the constant threat of wildlife and continuous rain leads to challenging survival situations for even the best of players.

This article may need cleanup to meet quality standards.
Please help improve this article if you can. The Discussion page may contain suggestions.

Livonia, German Livland, lands on the eastern coast of the Baltic Sea, north of Lithuania; the name was originally applied by Germans in the 12th century to the area inhabited by the Livs, a Finno-Igoc people whose settlements centered on the mouths of the Western Dvina and Guaja rivers, but eventually was used to refer to nearly all of modern Latvia and Estonia. [2] At the start of the 12th century, Livonia was an area of economic and political expansion by mainly Danes and Germans. The grounds hosted multiple crusades over the course of centuries until a Polish republic and a re-established democratic Lithuania was proclaimed in 1918. The countries had little time to celebrate their independence though because World War II was closing in. When war inevitably began the Nazi Germans invaded Poland-Lithuania and laid their eyes on the Soviet Union (USSR). After years of war, the Soviet Union pushed back the Germans leading to a costly defeat. The Soviet Union then took the Poland-Lithuania Commonwealth under their arms in the Warsaw Pact and created a satellite state during the beginning of the Cold War. Following the occupation of Livonia by the Soviet Union, Nadbór had become a breeding ground for anti-Soviet resistance, and partisan activity followed World War II for decades to come until they were stomped out by the Soviets in the mid-1960s. Subsequently, the Poland-Lithuanian Commonwealth was free of Soviet control in 1989 and sought help in rebuilding their nation from the North Atlantic Treaty Organization (NATO). While the rebuilding of cities began, some of the war-torn towns were left to rot, leading to masses of empty decaying buildings being taken back by the environment. These decayed buildings were thought to have housed partisan groups back in the mid-1900s due to the fact that military clothing, weapons, and ammunition can be found throughout these buildings. When the infection arrived many of the cities were caught off guard, and the severity of the disease was underestimated by the government. It was known that Livonia was fairing well against the infection and the destroyed cities and spaced towns helped slow the infection. Unfortunately, the limited military that was there went AWOL which led to mass looting and civil unrest. The Livonian Defense Force was then tasked with fighting off the infected, but since they were only made up of forest rangers not much order was ensued.

Like Chernarus, not much is known about the Infected outbreak in Livonia, but there are signs of the military before and during the Infected spread to Livonia. The Infected most likely approached from the south and migrated north due to Chernarus' location to Livonia. Since the towns are so rural, it can also be noted that the virus did not spread as fast. There is also a possibility that the virus spread through water or by train from Chernarus to Livonia sometime between 2018 and 2019. This timeframe is estimated because of the potential halt in economic growth from Soviet rule and the presence of the FX-45 in the loot tables in-game.

In many places, you can find remnants of resistance to infected and quarantine procedures conducted by the military and government.

Likewise, you can find the destroyed cities overgrown with vegetation and bunkers that had been used to fend off foreign attacks.

After the outbreak, the local military and civilian defenses were overwhelmed. The majority of inhabitants fled the area to a more supplied region that was able to sustain their needs. The Survivors who refused to flee either starved or were turned into Infected. With this lack of structure, Livonia fell into civil unrest, leading to banditry and lawlessness. 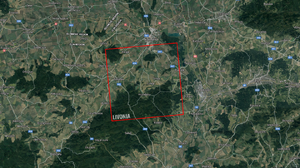 Location that inspired Livonia in the Czech-Republic

Livonia is located south of the Baltic Sea and is in close quarters with the Carpathian Mountains. The area consists of condensed forests and rough terrain that hosts a multitude of lakes and the Biela River. The landscape is asperous and the forests are packed, lined with deep valleys and undulating hills. The fields are widespread; especially in the north, and vegetation is densest near river beds and around lake shores. Its forests and valleys host many rural villages and the ruins of Livonia's past. Livonia is home to hiking trails that you can follow to your destination, along with overgrown dirt roads that are taken back by nature. The north houses the majority of the general population and the region is sprawling with pop-up industrial areas.

Livonia features a lush of late summer with frequent rainfall and thunderstorms that are typical of a European country. Wildlife and nature coexist in this expansive land and is overlooked by landmarks that make this landscape unique.

There also exists within Livonia a castle; Branzów Castle.

Livonia is a region that overlaps the border between Lithuania and Poland and parts of the larger area stretches into Russias' Kaliningrad.

The forests are heavily populated by wildlife, including deer, wolves, and bears.

Livonia is an industrial region filled with factories for the production of metal goods and a multitude of farms that are shipped in Cargo Containers (Military) and Cargo Containers (Civilian) throughout Europe. One such location to note is an unnamed large industrial area south-east of Nadbór and another east of Karlin.

The roads are mainly dirt, with some asphalt roads that will lead to major cities. Dams can also be found on small streams throughout the region. Factories can be located in major cities or by themselves on the outskirts of small towns. Livonia hosts three major railway stations which are located in Topolin, Grabin, and Borek.

There are three major northern cities:

Major towns in the southern region of the map:

There are also many smaller towns, villages, hamlets, etc. scattered around Livonia. You can also find many man-made landmarks, amidst castles, a Prison, and destroyed villages.

The Livonian Defense Force serves as the region's primary land and air defense force. Forest rangers maintain law and order through the remote areas of Livonia where normal law enforcement patrols the populous areas. It can be noted that the police force maintained a key role in preventing the spread of the Infected, in comparison to the local military. In-depth articles can be listed by following below:

There are multiple different languages that are spoken in Livonia. The main languages being Polish and Latvian. But Russian, German, Czech, and other Slavic languages are spoken. One such language that went extinct was Livonian.

The Catholic Church is the most prominent religion in Livonia, and many Livonia Churches can be found in major cities. Eastern Orthodox churches can also be found, but a small minority amount of people practice the religion.

In DayZ Standalone, the game map known as Livonia is ported from the spinoff game, ArmA 3 Contact, and is set in the ArmA 2 universe, years later from when the virus started in Chernarus.

Outside of Livonia[edit | edit source] 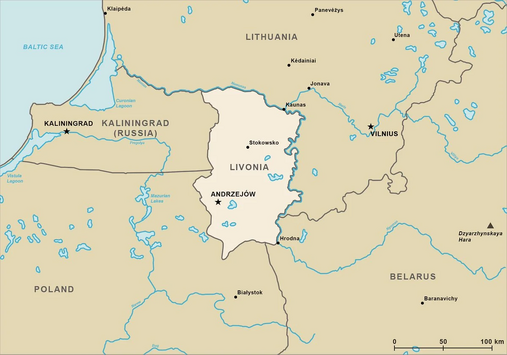 As mentioned above, the Livonia where DayZ Standalone takes place is part of multiple different countries that broke off from the USSR. With the playable area being part of a larger region. There are other territories beyond what we can see and play, and even more countries that border Livonia.

Other Places in Livonia[edit | edit source]