Note: this page covers the Mod version of DayZ; for information on the Standalone, see Berezino.

Fullscreen in New Window }} The biggest city in the north-east, short "Berez" or "BZ", has a hospital, a small military camp, two supermarkets and a lumber yard. Its name derives from "Birch" in Russian. In real life Berezino is a city in the Minsk Province, Belarus. Population 13,300.

Because of its sprawled-out layout, Berezino is more time consuming to loot than Cherno or Elektro, though there is decent loot to be had in the City. Survivors tend to congregate around the Hospital and Military Camp, leaving the coastal port empty.

The Hospital usually has a box of medical supplies at the base of the ladder on the backside as well as a box on the roof. If neither of these spawned, you may want to break the front glass by shooting it several times and take the medical supplies from inside. There is also a Military Tent in the courtyard next to the Hospital that may spawn Weapons.

Don't forget to check the apartment houses across the road from the northern supermarket as well as the apartments near the very north of town on the west side of the lumber mill.

The military camp which spawns military grade Loot is on a football field to the northwest of town. The apartments are south of that.

The first supermarket is directly east, across the street of the apartments. The hospital and the other supermarket are further south and uphill, towards the main part of town.

In the lumber yard, north-east of these other landmarks, you'll also find an office building with lots of residential loot, as well as many industrial buildings.

Towards the eastern part of Berezino close to the port there is a crashed C130 near destroyed houses, the C130 can spawn military grade loot. 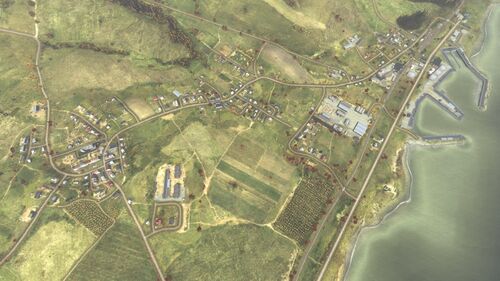