Note: this page covers the Mod version of DayZ; for information on the Standalone, see Msta.

The village of Msta (Cyrillic: Мста) is sandwiched between Mod:Dolina, Mod:Staroye and the coast. In real life, Msta is the name of a self propelled 152mm hovitzer of Russian origin (the 2S19 Msta), which in turn is named after the Msta River.

Msta is a small town with no significant buildings of any value. As with most towns, it contains a water pump near the center. There is also a Mod:Deer Stand directly north of the town, as well as one south-south-east of the town, through a small bit of forest.

Questionably worth raiding as there are usually many zombies and not that much loot. Players spawning at Mod:Three Valleys can work their way inshore to here and then to Mod:Staroye, before heading south to Mod:Elektrozavodsk, coming in through the power plant.

The main town contains ten lootable buildings classified as low yield; there is however an easily accessible barn on the eastern side, away from other buildings with a potential for rifles. 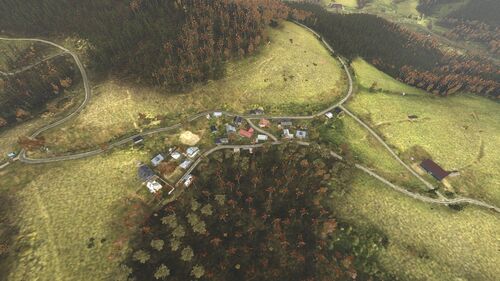