Note: this page covers the Mod version of DayZ; for information on the Standalone, see Old Bike.

The Old Bike is a single seat vehicle that may be found in several areas around Chernarus. As a mechanically-powered vehicle it does not require fuel to be operated, and because of this it is also significantly more difficult to travel uphill than down, just as with a real-world bicycle.

The bicycle is an exceptional and economical way to tour the roads of Chernarus. While the passenger is extremely prone to hostile fire, the bike makes significantly less noise than your typical gas-powered vehicle, effectively giving the player a low profile through towns and cities.

High speed collisions may damage or even destroy the tires and render the bicycle useless. Collisions or somersaults may also result in shock or even death.

To completely repair a Bicycle, you will need:

The Russian bicycle V-128 "Druzhba" (rus. В-128 "Дружба", translates as "Friendship") may have served as a prototype for the vehicle from DayZ Mod. It was based on another Russian bike called "Ural" famous for its durability and reliability. "Druzhba" was produced by the Minsk Motorcycle and Bicycle Plant (MMVZ, then Motovelo). Nowadays these bikes can be still seen in the countryside of the former USSR. 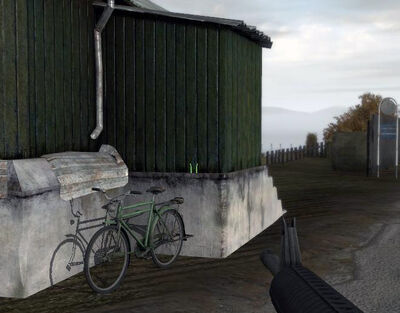 A bicycle that spawns by the green house between Novy Sobor and Guglovo.

Bicycles may be found in locations such as those mentioned below, though these may or may not be actual spawn points.