Note: this page covers the Mod version of DayZ; for information on the Standalone, see Stary Sobor.

The biggest town in the center of Chernarus, its name means "Old Cathedral". The central location and the proximity of the NW Airfield makes this city quite popular among both Survivors and Bandits. Central in the popular Kabanino---Stary Sobor----Novy Sobor line.

The main attraction of this town and also what makes it most dangerous is the many military tents on the north side of town. These tents spawn military grade loot. This makes the area extremely dangerous because bandits and snipers with military weapons will usually be waiting around the town in order to farm these tents. This town has one of the highest concentrations of military loot in the game. Other hotspots for military loot are the three Airfields, the four military tents in Berezino, and the fire stations in Elektrozavodsk (two) and Chernogorsk.

If you're after the supermarket, it would be wise to approach the town from the southwest. This will make it easier to get in and out without too much zombie resistance. Approach from the northeast under cover of the trees if it's the military tents you're after.

Be careful entering the tents from the eastern side of the town, as most players enter from that same direction, it is best to come directly north, where you may stumble across some bandits, or from the southwest or northwest, where not many players watch. 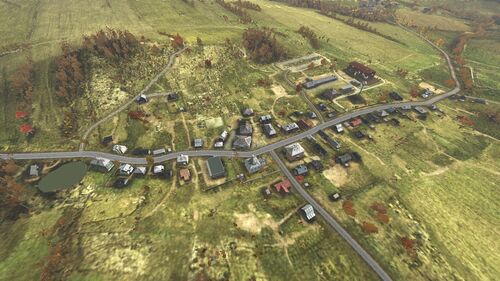