Note: this page covers the Mod version of DayZ; for information on the Standalone, see Zelenogorsk.

Zelenogorsk lies to the North of Mod:Kamenka along the left-hand border of Mod:Chernarus. The name derives from "Green Mountain" in Russian. Zelenogorsk is a common detour for players making their way from Mod:Chernogorsk to the Mod:International Airfield as it can spawn a large amount of Food and Medical supplies. Players will often set up Mod:Tents in the deep woods surrounding the city as well. Thus, despite it's lack of Military loot and relatively remote location, it is quite common to encounter other players in Zelenogorsk.

In real life Zelenogorsk is a "Closed City" in Krasnoyarsk Krai, as well as a suburb of Saint Petersburg both in Russia.

Zombies can often congregate in large numbers around the perimeter of Zelenogorsk however once inside the city, the infestation can be light. Furthermore, a shop, hospital and office building can be found right at the southern entrance which makes it safer to get to. This area can be a great source of food, water (fountain to the east) and other supplies but also dangerous due to its proximity to the coast. There is also a barn within close proximity to the SE of the supermarket. Most players in the city are either new players headed inland, or well-equipped survivors who make their way to Zelenogorsk for food. The town is a popular stop for players making their way to the Mod:International Airfield as it gives them a good chance to stock on on supplies with a low risk compared to Mod:Chernogorsk.

Zelenogorsk is also a former Finnish town called "Terijoki". Finland relinquished it to Soviet Union in 1940 as part of a peace treaty at the end of the Winter War. 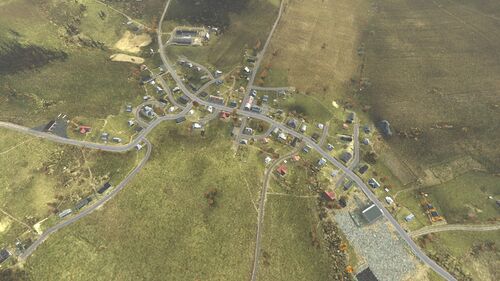