Note: this page covers the Standalone version of DayZ; for information on the Mod, see Mod:Navigating.

Navigating is the always-important skill of being able to traverse the world you live in without getting hopelessly lost. Knowing where you are now, and how to get where you want to go, is key to surviving in an unfamiliar area. There are multiple ways of finding your position or direction, which can aid you in finding a way to your destination safely. Although some may be easier than others, mastering all of them means that you'll never truly be lost in the wild no matter how far off the path you stray.

There are several devices which can be used to determine your position and/or direction, making the task of navigation much less difficult.

The sky above you is able to be utilized for the purpose of determining direction. It won't tell you where you are on the map, but it can at least help get you to where you're going.

One of the most obvious ways of determining direction is observing the sun's relationship to the earth. "The sun always rises in the east and sets in the west" is mostly true, but only an approximation because the sun's daily course across the sky is going to vary throughout the calendar year. When using this method, you'll of course need to know whether it is morning or afternoon; this can be determined by watching as the sun either rises or falls in the sky.

At night, it can be hard to orientate, which makes it more difficult to know which direction you're walking. Finding Polaris, AKA the " North Star", is the most obvious and reliable way to find your direction of travel in the dark. While the night sky will rotate and move as you as time passes, Polaris will always point north and finding it will give you a solid reference point when you don't have a compass.

During the waxing and waning crescents of the moon's phases, it can be used to determine a rough approximation of which direction points south. To do so, first locate the moon and draw an imaginary line connecting the two points of the crescent on the concave side. Then extend this imaginary line down to the horizon. Where this line intersects the horizon is roughly south. 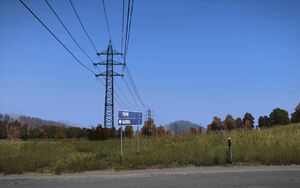 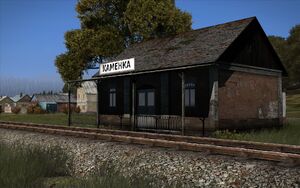 If you are in the countryside, in the middle of nowhere, look for signs of civilization such as: a road, railroad, or power lines. Following them will always lead you to a town eventually. If you really need to find a town, use a high vantage point, like a hill, to scan for buildings. Don't expect to find a metropolis at the top of a mountain, either.

Look for notable landmarks. You can find many such places to help figure out where you are.

On ChernarusPlus, this is the simplest method that can be used if you're near the shore and aware of your general location, since Chernarus connects with the sea in the south and east. If you're at the south coast, turn your back to the sea and north will be in front of you. On the east coast you will find north by having the sea to your right.

As fresh spawn, if you are able to see the coast, you can easily use the coastal railroad tracks to find your general whereabouts. Once at the shoreline, turn around so the water is at your back and run inland.