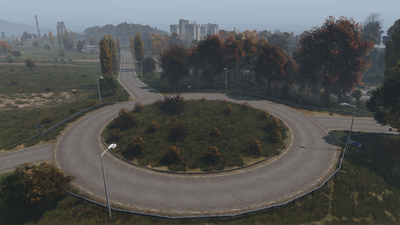 A roundabout in the suburbs of Chernogorsk.

Roads make up the most prominent transport network in DayZ. Spanning each corner of the playable regions and connecting villages to cities, they act as routes for safe motor transport, signposts for a relative location, and markers for navigation.

As a Survivor, roads act as routes to follow from the coast inland, and help to identify loot-rich locations through their signage. Named roads and bypasses in Chernarus include Pass Oreshka and Grozovoy Pass, where a vital stretch of street connects one part of the oblast to another.

The roadways experience many obstructions, however. Being constructed early before the Outbreak, many streets are in varying degrees of disrepair, from large cracks and fissures in the asphalt to smaller potholes. Abandoned vehicles can easily make it difficult to travel by car in areas of pre-Outbreak popularity, such as the Western Highway, and other infrastructure, such as railways and rivers, can limit the number of road crossings between certain areas of South Zagoria and Livonia.

There are a variety of road types in DayZ, from small field tracks to wide open highways, often a road surface can be an indication of its intentions and destination.

Paved roadways will bear the risk of more player traffic due to their interconnectivity between towns, whereas rural tracks will be less reliable for motor transport and will often lead away from cities. It is important to learn the general road layout in order to identify your location and move on a fixed route.

Primary Roads, such as the one that makes up the inverse C-shaped highway that spans Chernarus, are generally high-traffic routes due to their prominence and proximity to population centers.

The more-rural roads, including the Gravel and Dirt Tracks, are more commonplace, forming a web around the map and connecting most hamlets and villages to the main streets. Often with no roadside lighting or markings, they are found across the rural landscape.

One of the most important features of the roadways are the Signs that accompany them. Allowing for easier navigation to many areas, they are used widespread by Survivors intending to get their bearings. Chernarussian signs are in the Cryillic script, meaning that a basic understanding of the characters is utile for recognition[1].

Town Boundary signs mark the borders of settlements where they intersect with roads, informing travelling Survivors of the town that they are entering or leaaving - provided signs are present. They are characterised by their large lettering depicting the area name, and include a red strike through the center to indicate exits.

Some smaller and rural hamlets may be absent of proper boundary signage, for example Berezhki and Zvir.

Found at junctions and between long stretches of roadways, Directional Signs indicate the approximate distance and direction of up to three settlements in kilometers.

These blue panels can be used to estimate travel time between destinations and indicate their road direction similar to Hiking Trails. Locations with no arrow indicate that they are straight ahead, whereas routes to the left or right will have corresponding arrows on their line.