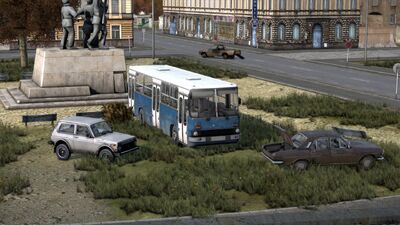 Vehicles are used as a means of transportation for people over the terrains of DayZ and also as a means of item storage. They can be found in many different places, usually near buildings, and can be found in various states of damage -- sometimes with various parts attached, missing or broken and lacking fuel or water. These parts may have to be replaced or repaired and fuel and water will have to be added before Survivors can make proper use of the vehicle.

Vehicles are some of the few components of gameplay with persistence enabled until they are completely destroyed, have been left unused for a long time period, or been placed outside the playable limits of the terrain, after which the vehicle will usually be respawned at a new randomised location. As with most things in the DayZ world not connected to your actual character, vehicles are non-transferable between servers. Currently, all land vehicles are driven in manual transmission and require proper gear shifting in order to operate (default: Q and E for down and up shifting respectively) on PC.

Attacking vehicles will not

The following is the list of vehicles currently in DayZ:

The following were previously available in DayZ and are awaiting reimplementation: 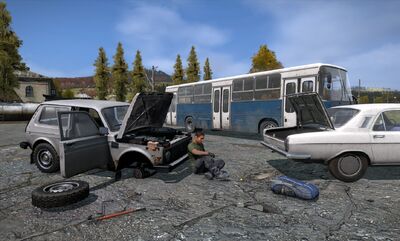